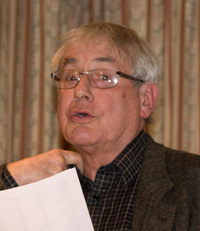 It is with sadness that we record the death after a short illness of Tony Baines, one of the Federation's Vice-presidents.

Tony was a teacher and later a headmaster in and around Birmingham until taking early retirement in 1992. In 1974 he joined the former Shirley RMS, and before long the society was exchanging presenters with the society in his native Stoke on Trent. He also enjoyed exchange visits with societies in an area extending from Stafford to Tewkesbury. After retirement, Tony returned to Stoke and soon found himself secretary of the local society. In 2002, at a time of some upheaval within the FRMS, he was persuaded to join the Committee as Secretary and he helped to put the Federation on the sound footing it has today before handing over the reins to Jim Bostwick in 2011. After a sojourn in the West Country he returned to Staffordshire where he was soon involved in Stafford RMS.

Beyond music, Tony had an interest in railways stretching back to his youthful days as a trainspotter - an interest shared with our late Vice-chairman, Roger Apps, and our current Chairman.

We extend our sincere condolences to his wife, Sheila, and his extended family.